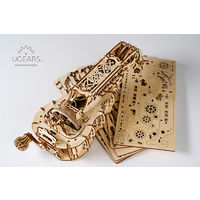 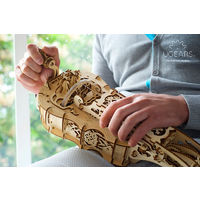 The Mechanical Musical Model You Put Together Yourself! Enter your gift message below: Leave blank if you don't want a message

* Receive a 33% discount on extra giftwrapping.

Email me when UGears Hurdy Gurdy is back in stock

The Ugears Hurdy Gurdy shows off the team at Ugears skill of expanding the creative world of hobbies and transforming the art of assembly into an exciting game.

Hurdy-Gurdy – the world's first mechanical musical model that you put together yourself. It is the most extraordinary mechanical model kit which is all-in-one: model for self-assembly, toy and fully fledged musical instrument.

The Hurdy-Gurdy plays dancing melodies, from folk to modern, being the bridge between the medieval times and the present day. A unique blend of the joy of creation, playing music, and engineering and design. Just build it together with your own hands and feel like Stradivari or a popular Hurdy-Gurdy star!

With a total number of components of 292 and an estimated time of assembly of 4-5 hours for beginners or quicker for experienced Ugears builders you'll love the end result of this cool kit.

The Ugears Hurdy-Gurdy comes with everything you need for assembly.

All the pieces have been precut into the plywood boards and are easily removed for assembly following the detailed instructions provided.

The only non-wood parts, by necessity, are the two strings that rub against the crank powered wheel and the rosin used to wax it.

Estimated assembly time of the Ugears Hurdy-Gurdy is 4-5 hours for beginners and less time for professional builders. Assembles without glue or special tools and without toothpicks.

The model has a melody string for playing melodies and a bourdon string for a background sound. 6 keys correspond to 6 notes that are played by pushing the key while rotating the crank.

The released keys provide one more, seventh, note. The second (bourdon) string is tuned by tuning the peg in unison to the melody string or in any melodic interval (quart, quint, octave).

The construction kit includes pieces of rosin to wax the wheel and improve the sound.

The Hardy-Gurdy by Ugears is a fully-fledged musical instrument.

To start the music flowing, the player just need to crank the handle with one hand to kick off a drone sound from the bourdon and melody strings.

Pushing the wooden buttons with the fingers of the other hand changes the pitch of the melody string, as "spring-loaded" wooden blocks essentially shorten the string.

The Ugears Hurdy-Gurdy brings the unforgettable time of working together on things that are popular among people of any age. Just put it together and you are ready to throw an original party giving a new spur to whatever music you like – whether it is folk or modern – playing your new unique Hurdy-Gurdy solo, duet, trio or quartet.

By: Barry Stewart on 28 June 2022 - Verified Customer
This was a very rewarding build. The instructions were simple to follow every setup of the way. Rubber bands seem to be a problem for some builders, but they could not have been more straight forward to handle in this build. A great model, it looks so good finished.
(5)

Hurdy Gurdy for the win

By: Tony on 31 December 2021
This was a 21st birthday present for my son who really didn't want or need for anything. This present fitted the bill perfectly and has been played with everyday so far.
(5)

By: Jeremy Davies on 23 November 2021
Fantastic design with high quality manufactured parts. Even the “hammer assembly tool” used to help tap pieces into place is a work of art! Great fun to build - and I’m managing a tune!!
(5)

By: Rod on 14 October 2020
Absolutely stoked!!! I received the UGEARS Hurdy Gurdy as a Father's Day gift and could not be more impressed. It's beautiful, musical and I get to put it together. So happy right now!
(5)

By: David Schilling on 13 October 2019
Loved this model! All fit together perfectly and was fun to build and play with afterwards.
(5)

Write a product review Back to Top

When people buy UGears Hurdy Gurdy they normally buy these too: Most popular from the 30th Birthday Gifts for Men category: 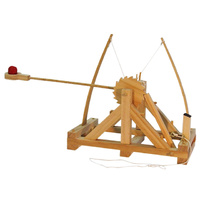 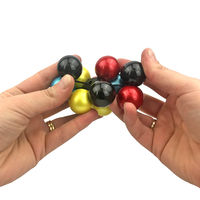 All Content, Text, Photos, Videos, Media on this website is Copyright © 2022 CoolThings Australia - stealing other peoples work is uncool, please don't do it. 48250