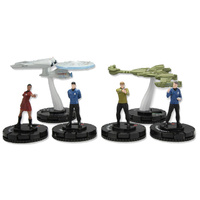 If you would like us to send you a quick message if we get this back please use our Notify Me System In the meantime while you are visiting please check out all the other popular and best selling gifts on our website, you’re bound to find something you’ll love.

Star Trek Expeditions, one of the most anticipated sci-fi games in recent history has finally arrived! Play as Kirk, Spock, McCoy and Uhura as the USS Enterprise enters orbit around the planet Nibia!

Designed by award-winning game designer Reiner Knizia, Star Trek Expeditions is a co-operative mission board game for 1 to 4 players who band together to subdue an impending Civil War that is threatening to break out on the planet Nibia.

Star Trek expeditions is set it in the "New Universe" of Star Trek as seen in the 2009 movie. Once you have assumed the role of your favourite character in mind and strength, the game begins!

The premise is that the Federation has received a petition for membership from the planet Nibia and the Enterprise is dispatched to assess their application. When the Enterprise arrives they discover that:

1. A Klingon battle cruiser is in orbit;
2. Civil War is threatening to break out on the planet;
3. The planet is reconsidering (coincidentally) its application for UFP membership.

Your mission is threefold: Defuse the threat of Civil War, take care of the Klingon threat and get the planet to join the UFP. The clincher is that you only have 30 days (roughly equaling 30 turns) in which to complete your mission before a Klingon battle fleet warps in and forces you to withdraw - thus failing your mission.

Each objective is tracked on a score sheet that monitors your progress. Any decisions you make in the game, as well as how you interact with other players, will affect the outcome of the mission.

Random side missions, a unique branching mission tree, and three difficulty levels make each game a unique and challenging experience for you and your crew.

The four game pawns are fully rendered, 3D versions of the four Bridge officers. A manually rotating dial at the base of your character, as well as the two spaceships, indicates game statistics such as damage and corresponding diminished abilities.

Suitable for up to four players.
Recommended for ages 14 and up.
Game runs for approximately 60 minutes.
In the future new missions and crew members will be made available for players to participate in different Star Trek "episodes".

Be The First To Review This Product!

Help other CoolThings Australia users shop smarter by writing reviews for products you have purchased.

Most popular from the SimplyCool category: All Content, Text, Photos, Videos, Media on this website is Copyright © 2022 CoolThings Australia - stealing other peoples work is uncool, please don't do it. 153